One thing I’ve written several times is the idea that, over the long haul, house prices haven’t changed all that much since the early 1900s once they’ve been adjusted for inflation.

A result of this is (I said) that housing prices aren’t going bounce back very quickly to 2007 levels, when prices were inflated by the housing bubble. The end result of the recovery would be prices getting back to tracking inflation.

Turns out that may be a (common) error, and that home values may in fact have risen — and thus will rise — significantly faster.

It starts with Robert Shiller (of Case-Shiller fame), who analyzed U.S. housing data back to 1890. Giving those 1890 home prices an index value of “100,” he then tracked them through the decades, always correcting for inflation.

He found that they sometimes dipped (e.g., during the Depression the index dropped into the 60s and 70s), they sometimes jumped (into the 120s during the late 1950s), but all in all they tended to stick around that 100 mark. Ergo, there are ups and downs in home values, but there isn’t a long-term upward trend apart from inflation.

It did to me. But that’s what I get for assuming that Shiller’s numbers were accurate and calculated correctly.

Economist Tom Lawler says they ain’t. Lawler found — digging into Shiller’s sources — that he had used numbers from different places using different calculations and different methods for collecting them. For example, he didn’t account for inflation as best he could have. In short, Shiller’s numbers were, well, wrong. 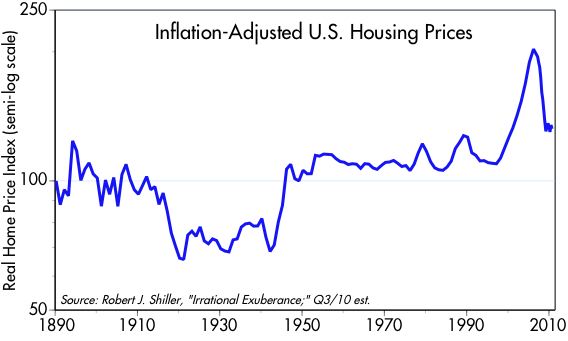 You see the dip during the Depression and the bubble we’ve just come out of, but it pretty much tracks around that 100 mark.

But when Lawler dug into the numbers and used more accurate ones — for example, making sure to use a consistent means to correct for inflation — he found that in fact housing prices do rise:

I am not going to get into the weeds with Lawler’s details — he does a great job of explaining where Shiller went wrong and how he corrected for it. The bottom line, though, is that I was apparently wrong to say that housing prices only track inflation. Assuming Lawler has his facts and math right, homes do appreciate faster than other prices.

Maybe it’s because, as Mark Twain put it, “Buy land, they’re not making it anymore.”